Posted on February 10, 2017 by The Eureka Police Department 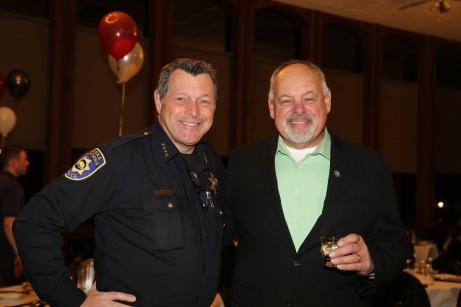 Interagency cooperation is vital to the success of any police agency. No matter how big or small, each department relies on its local, state and federal partners to be effective. Mike Downey, the Sheriff of Humboldt, has been a great partner.  Mike is one who is quick to answer his phone and bring resources to the table.  Within one hour of finding out I was the newly appointed Chief of Police, Mike Downey called me to welcome me to Humboldt, offering his home as a place to stay…short term.  Billy Honsal has proven to be just as collaborative.

EPD arrested an armed robber plaguing the downtown area. The jail was full and I needed space to put this person in jail.  I called Mike and Mike made room in the inn.  EPD had operations that needed extra personnel.  Mike NEVER said, “No.”  He always stepped up to the plate and helped.  It was Mike’s strength that instituted and maintained a countywide SWAT team when EPD shuttered its doors to a tactical team.  EPD and HCSO currently staff the team that he sustained.  His SWAP unit has been immeasurable in cleaning up the ecological disaster left by illegal camping.  Mike Downey has lead from the front in the local Chief’s group and the Humboldt County Drug Task Force.  The list could go on.

What people may not recognize or understand is that while we may be dysfunctional at times, things work based on the strength and personality of executives like Mike Downey, who don’t harbor their assets like marbles on the playground, but share their resources for the betterment of its citizens. This sharing includes the DA, Fire Chiefs, Police Chiefs, DHHS, Probation, the Sheriff and Public Defender.  Yes, it takes all of us in the system to ensure effective government, even though at times we may be on the opposite side of the table.

Humboldt will take a hit with Mike’s retirement, but I am sure Billy Honsal will step in and help immensely. Likewise the newly appointed public defender, David Marcus, will be a good addition to ensuring justice and individual rights are protected.

Enjoy your well-earned retirement Mike.  You and Annette have served us well.

To educate, inform and engage Eureka in solving problems of crime and disorder

News and professional developments from the world of policing